Broom Street Theater was founded in 1969 by the late Stuart Gordon, who later became a Hollywood filmmaker (Re-Animator; Honey, I Shrunk the Kids; and more), though he left almost immediately. He had been involved in some other cutting edge theatrical productions prior to the founding of the theater. 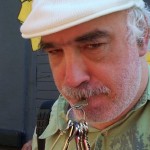 Shortly after Gordon left the theater the title of Artistic Director was bestowed on Joel Gersmann, who became the face, the heart, and the soul of the theater for three dozen years, until his unexpected death in 2005. Gersmann created a unique style of theater that drew from multiple and varied sources, including Bertolt Brecht, Jerzy Grotowski, Howdy Doody, DC Comics, 1950’s and early 1960’s television, opera and symphonic music, and more. He was an incredibly well-read person and drew upon his voracious reading to create his unique, stylized plays. Gersmann’s plays used actors as set pieces (what he called his “kinoplastic aesthetic”) and as musical instruments and often explored political and social themes. His work influenced virtually every other writer and director at the theater, though he strongly encouraged new writers to find their own unique voices.

Unlike many theaters Broom Street Theater owns its building, lives on a small budget, and makes decisions based on artistic rather than financial choices. It has allowed the theater to take the chance on creating some incredibly original work in its small black box space. Broom Street Theater has fostered many voices and started the careers of many actors, writers, and other theater professionals. Among them are: Charlie Hill, the first Native American stand-up comedian to ever appear on the Tonight Show with Johnny Carson; San Francisco actor and playwright Gary Aylesworth; Gip Hoppe, whose play Jackie O had a short run on Broadway, Broadway actor and director Andre Deshields, lighting designer Robert Seder (designed for Meredith Monk Philip Glass, and others); Chicago theater and television actor Lance Baker; Greek film director Georgia Grigoriou, Hollywood actor Jill Holden; Chicago playwright Bryn Magnus;music journalist and DJ Chris Morris, now writing for Daily Variety; New York City casting director Jen Ruden; among others.

Several theater groups have been founded by Broom Streeters.

Broom Street Theater has always been about nurturing artists. Its motto since 2005 has been One Theater/Many Voices, which relates to the encouragement of new writers finding their own voices.