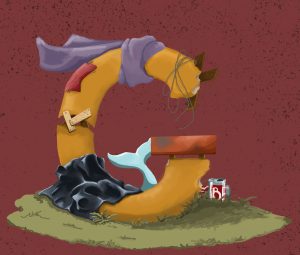 This isn’t the story your mother read to you. Geppetto is an angry drunk who creates a puppet out of boredom. Pinocchio of course is magically brought to life but sadly rejects him and runs away. Geppetto, alone once again, has a decision to make: stay at home and continue in his dead-end life or risk it all and go after a puppet who may once again reject him. As they both search the whole wide world for what defines them, their journeys ultimately lead them back to each other. Along the way they meet many shady and magical characters that push them to their limit. After they emerge from the belly of the whale with their lives transformed, they can face their new adventures together.

This stories combines elements of the classic children’s tale combined with other familiar myths and fables (such as the biblical tales of the prodigal son and Jonah and the whale) and mirrors the challenges we face every day as we strive to shake off our own woodenness and become more human.

Britton Rea (Geppetto) is excited to be taking part in his 23rd overall stage production, and his very first at Broom Street Theatre.  Previously, he could be seen last year as Milt in Strollers’ production of Laughter on the 23rd Floor, and as Dekker in the premier of Left of Left Center’s production of The Old Apartment.  Later this year, you can see him again playing Corin in Madison Shakespeare Company’s production of As You Like It. His acting philosophy is that you can’t ever be afraid to go up to eleven at any given moment, and to always try things that you don’t think will work because often times that’s where the real surprises lay that can make the heart of a character jump out at you. He wishes to thank his friend and director Stephen for this wonderful production.

Heather Jane Farr (Morgan) went to Musical Theatre College (in Canada) and has acted for over two decades in more than 60 different productions. Favorite experiences include portraying Mac in Dumpster Flower, Lolly in The Undertow, Eden in The 800th Annual Salvation Swing-Off, Nameless in Bite the Apple, Luisa in The Fantasticks, Anne Frank in The Diary of Anne Frank, performing in Madison Circus Space’s Nutcracker: The Holiday Classic with a Circus Twist!, and directing black & white. “HJ loves Kip!”

Loryn Jonelis (Pinocchio) is excited to be playing Pinocchio. As it turnes out they have much in common, for instance, they both wish they were real boys. Thank you for reading and enjoy the show.

Anthony Cary (Johnny Faux) is happy to be back for his fourth BST show, which of course means this is the fourth time Taylor is lighting him. He’s so grateful that so many people are sharing their talents, time, and creativity to make something special in the world.
“One must yet have chaos within to birth a dancing star.” ~ Friedrich Nietzsche

Emily Swanson (Linus) is thrilled to be a part of her second Broom Street show and to work with such a wonderful cast and crew. Emily graduated from Edgewood College with a double major in Theatre Arts and English. Some of her past credits include Kale in Black and White, Little Sally in Urinetown, Michael in Caucasian Chalk Circle, and Betty Paris in The Crucible. Emily would like to thank her family and friends for their love and support.

Donna Kapheim (Ensembler) appeared in Mercury Player’s Theatre’s 2015 panto “Gadzooks! Cinderella” and again in 2016’s panto “The Wizard of Oz.” Finding that she needs more stage magic in her life, she became part of this wonderful, magical world and never wants to leave it. Thanks to my family and Dan for always wanting me to do the things that make me happy.

Arwen Sadler (Ensemble) is a senior at Madison West High School and is excited to be in Gepetto. They have previously been in several productions at the Young Shakespeare Players, and some of their favorite past roles include Isaac Newton from An Idle Conversation and Miss Knag in The Life and Adventures of Nicholas Nickleby. They plan on attending Olin College of Engineering to study, well, something with engineering–they haven’t decided yet, but are interested in environmental engineering, mechanical engineering, and software engineering. Arwen also enjoys painting, drawing, and spending a lot of time outside trying to photograph birds. They’d like to thank the cast and crew for making the show such a fun experience.

Emma Ruby Roberts (Ensemble & Costume Designer) is a great doer of things. Unable to decide between her love of dressing people up and having other dress her up, she decided to fulfill the role of both costumer and actor. She really loved playing a whale’s ass, and actual ass, and turining her fiancé into a puppet.

Elly Craig (Choreographer)  is an 18 year old human. She has been involved in theater for as long as she can remember whether acting, running crew, or stage managing. She has had the privilege to work with Actors Factory, 608 Productions, Theater Lila, and American Players Theater. She has been dancing with KP School of Dance for 16 years because it makes her feel wild, crazy, and free. Another thing that makes Elly’s gears spin is Circus Arts (especially a discipline called German Wheel). Elly is very appreciative to have had the chance to work with all these hooligans and would like to send out a special Thank You to Loryn for being the most reliable, fantastic dance captain around, even when it came to seaweed arms.

Chelsey Wagemaker (Stage Manager) is excited to be back at Broom Street Theater stage managing for the fifth time and couldn’t be more proud of the Geppetto cast and crew for their hard work, dedication, and good humor. Special thanks to John for loving me more and to you for supporting local theater in Madison. Enjoy.

Malissa Petterson (Fight Choreographer) is a brain-of-all-trades who has a tendency to do too many shows at once. She spends her days at Encore Studio for the Performing Arts where she is an artistic associate, and her evenings with Are We Delicious? as their production stage manager. She also serves on the board of directors here at BST. Malissa would like to thank her husband Viktor for his unfailing love and support, for dealing with her impossible schedule, and for reminding her to breathe.